The Enemy is much more than what I describe here. Its story began before I even joined the project, and is far from finished. Many people were involved, bringing their expertise; often by investing time or money, sometimes even risking their lives. This subject therefore deserves the full support of all stakeholders to cover the entire spectrum of this incredible project. 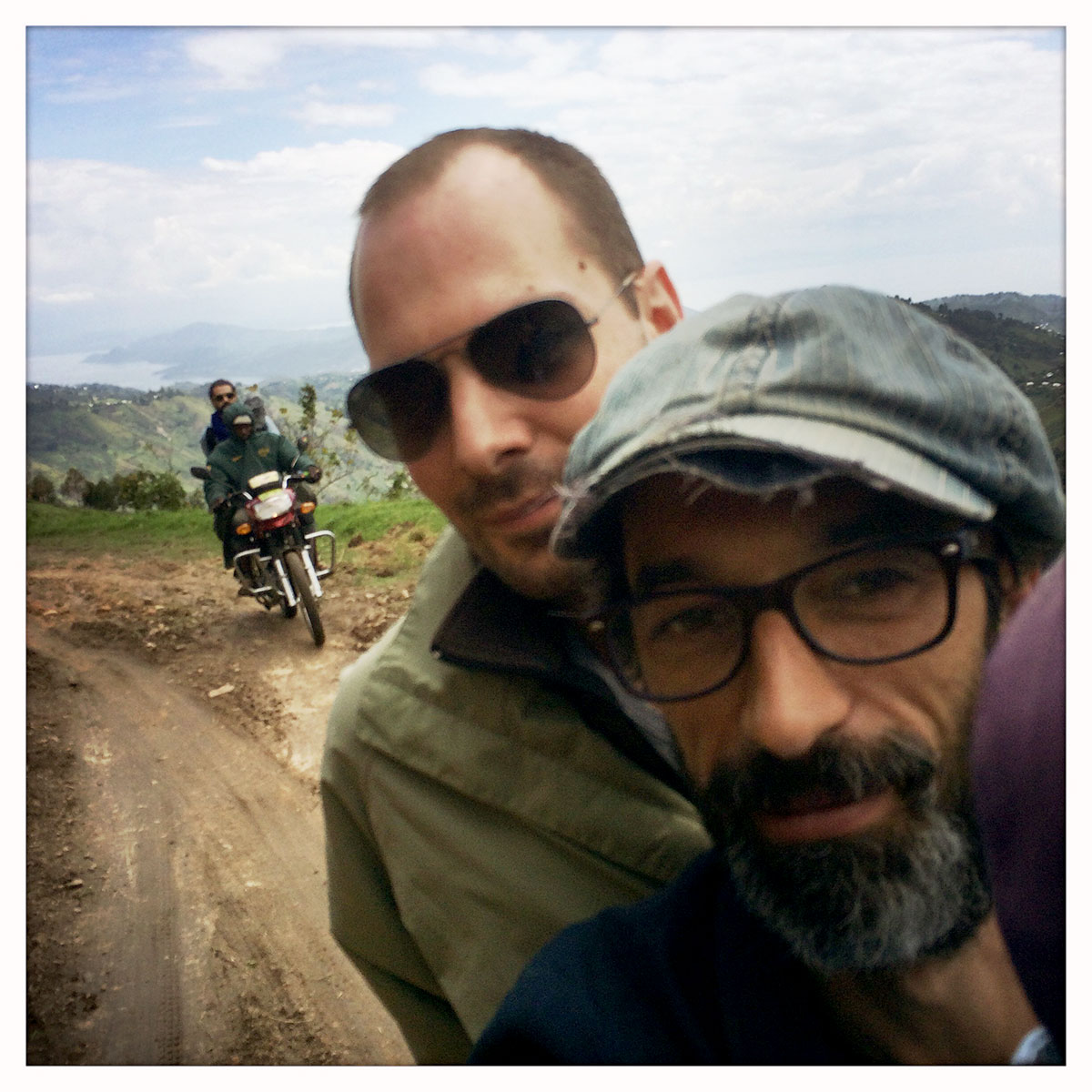 Karim and I on the road in Congo (©Karim Ben Khelifa)
I met Karim for the first time at Emissive offices in early 2014. Along with Chloé Jarry, project producer at Camera Lucida, they explained to me their vision of what would eventually become The Enemy: a virtual encounter with combatants from generational conflicts..
Karim, a war correspondent, had just discovered the power of virtual reality with the Oculus Rift prototype. He thought it would be the perfect way to get the combatants’ message across to the general public. His vision went even further: he wanted the user to be able to wander around to meet them face to face and, for operational reasons, he aimed to accommodate several users at the same time. In other words, he wanted to put a VR (Virtual Reality) headset on the participants’ heads and have them walk around in a large open space, along with several other people, without bumping into each other.

At Emissive, we had already been working with virtual reality for many years and we were used to technological challenges. What Karim and Chloé described to me had no equivalent in the world, and was simply not possible with the existing hardware at the time. However, I had a potential solution in mind that would take advantage of various current and future technologies.

So I said yes, I was confident that we could carry out the project. This marked the beginning of a wonderful human and technological adventure!

The Enemy takes full advantage of this new medium: virtual reality. This technology consists in immersing the user in a virtual environment and giving them the ability to interact with it.

Immersion is achieved thanks to a 360° stereoscopic vision of the virtual world and a spatial soundscape both calculated in real time, according to the user’s movements. In terms of interactivity, the user can move freely around the virtual environment, and act on various elements. I’d like to add that with virtual reality, the user is “captive”, cut off from the real world, which they can no longer see nor hear.

These attributes create a feeling of presence, that is, the impression of actually being in another world, realistic or not. Meeting the combatants in The Enemy, we have the illusion of being face to face with real people, thanks in part to this feeling of presence. This is where virtual reality differs from traditional media such as television or written press: we are much more attentive, and above all, much more involved. In The Enemy, participants spend 50 minutes listening to interviews, and stay focused throughout.

Be mindful, I am talking about virtual reality, not 360 video. 360 video, which can also be broadcasted in a VR headset, does not allow interactions and can’t provide the necessary stereoscopy to achieve a good level of immersion. Too often, these two media are wrongly aggregated under the name “VR”.

Technically, and as mentioned above, virtual reality involves calculating the images the user sees and the sounds they hear in real time. You have to take into account each movement, each action, and convert it into the VR headset within a few milliseconds: if I walk forward one meter, I have to see myself walking one meter forward in the virtual world, all at the exact same time. This is true for every movement, small or large, that participants can make.

The VR headset displays 90 images per second, which are calculated live by a computer. One is required for each participant. That’s why we are all equipped with a backpack (which is in fact a powerful computer) to which the VR headset is connected.

There are now “standalone” headsets that embark their own computing power: you no longer need a backpack. However they are not powerful enough to run such qualitative experiences as The Enemy. 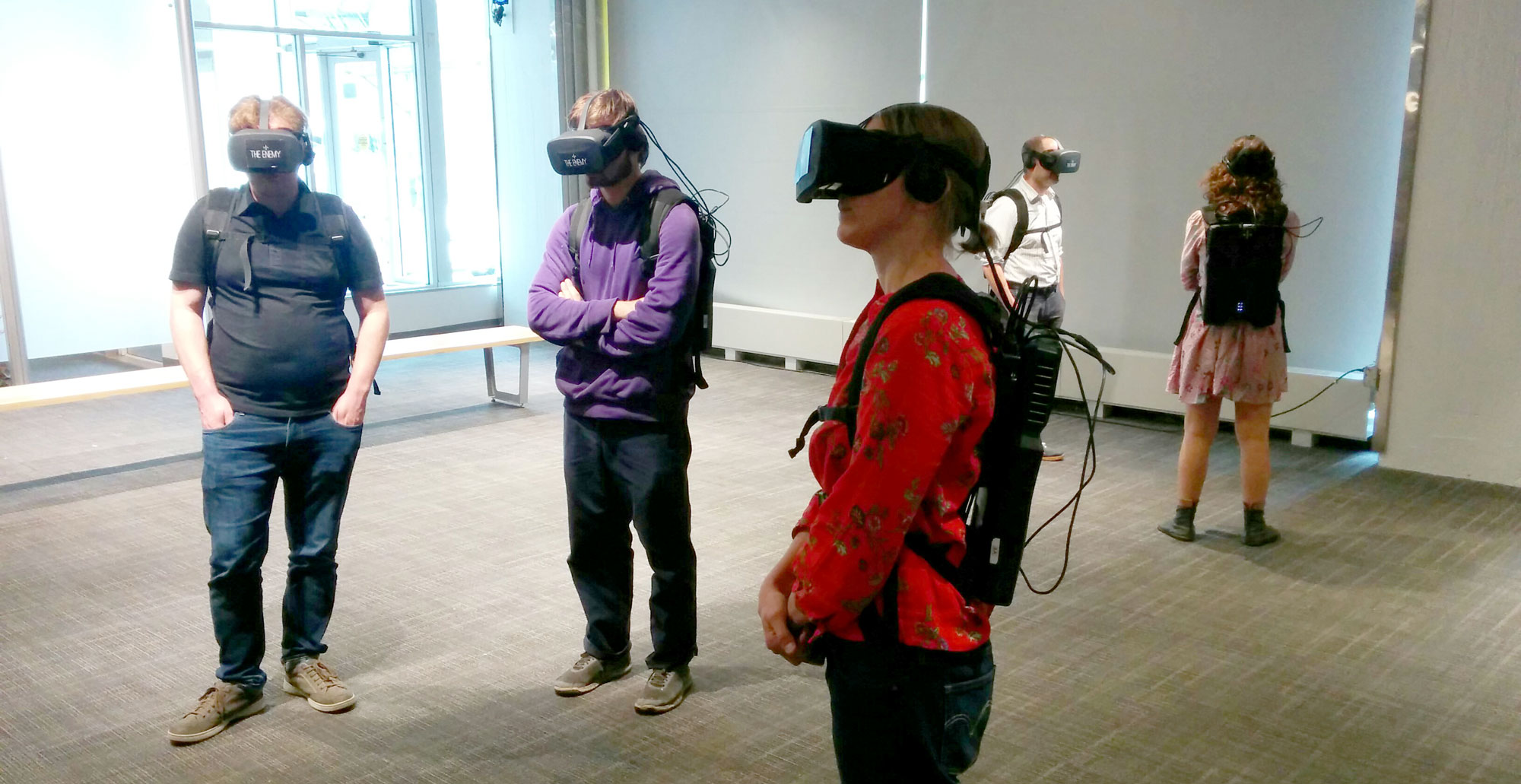 Visitors are equipped with a VR headset and a backpack-PC

In The Enemy, you meet real people, combatants from actual conflicts who have a story to tell. You can move around freely, getting up close within a few centimetres or walking around them. To achieve this level of freedom, you must recreate these people in 3D.

To design these virtual combatants, we had to start from sources captured in the field, in war zones. The Enemy features three conflicts: the Israeli-Palestinian conflict, the aftermath of the Rwandan civil war in Congo, and gangs in El Salvador.

These exceptional circumstances prevented us from using systems that were too cumbersome or too intrusive: motion capture with markers, photogrammetry studio, videogrammetry, etc.

We had to travel light and be able to install and pack up our equipment swiftly.

The need to create realistic virtual combatants within these constraints was one of the criteria for integrating Emissive into the project.

So I explained to the production team what we needed: a lot of photos, videos from different angles with sound recording and a neutral background. I also had the idea of using a portable 3D scanning system and non-intrusive motion-capture software.

This conditioned both the material to bring and the team to send on site:

Before leaving, we had a complete test session at our offices at Emissive. It helped us validate the equipment, the speed at which we installed the studio, the capture methods, and the quality of the result. After two days of testing, the method implemented was deemed conclusive. 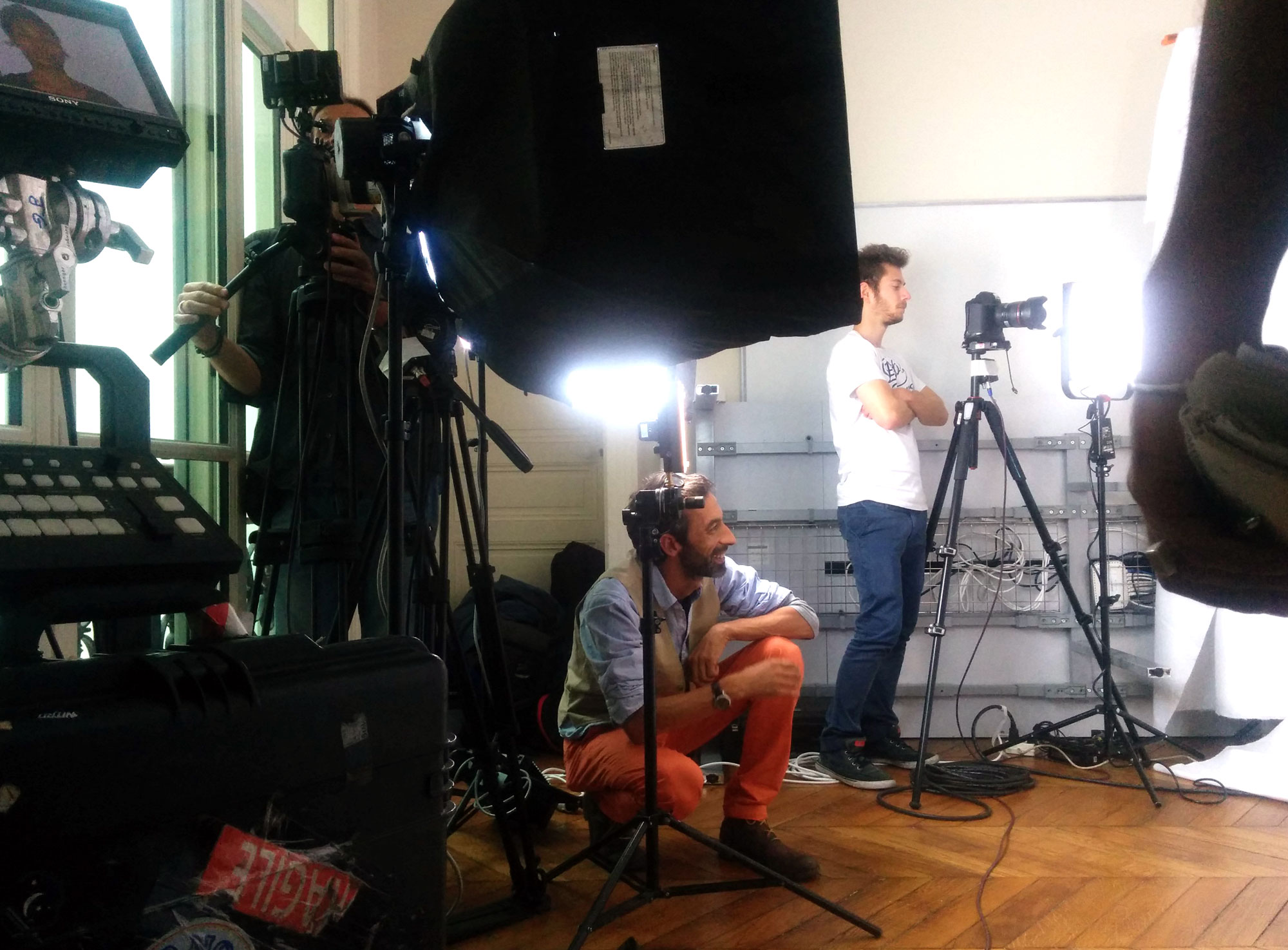 The combatants to be interviewed were chosen by Karim, assisted by local fixers. Places we would conduct the interviews in as well as all the travel logistics were handled by Silvia Alba, at Camera Lucida.
So we left with 4 cameras capable of shooting high-frequency videos, equipment to construct a white floor and background, microphones and lights. I also brought with me two Microsoft Kinects and a computer.
Previous Page
Next Page
THE ENEMY